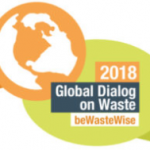 From 2013, website be Waste Wise each year organizes the Global Dialogue on Waste, a series of webinars about all aspects of waste management, both national (US) and international, especially the UK and Europe. The 2018 series consisted from two parts: New Systems for North America (04-09-18) and Learning Across The Atlantic (05-09-18). The second series started with Ranjith Annepu (RA), talking with Ad Lansink (AL) about some issues of his book Challenging Changes. Did you miss the live event for Learning Across The Atlantic | 2018 Global Dialogue on Waste? You can watch the replay here: https://wastewise.be/webinars/learning-across-the-atlantic-2018-global-dialogue-on-waste/.

(RA) Why did you write the book?  Doesn’t Circular Economy cover the waste hierarchy?
(AL) I wrote Challenging Changes for more reasons: first to explain the relation and connection between the Ladder of Lansink – the waste hierarchy and circular economy (CE). The waste hierarchy is an essential tool – a guide map – for CE. Secondly, to warn of the pitfalls during the transition to CE. Some people think, that only mentioning the word CE solves all problems. I advocate a realistic and careful approach without marketing tricks. Finally, because to the request of an English translation of my first book about Lansink’s Ladder ‘ De Kracht van de Kringloop’. But that book,  published in 2010 appeared not useful for a direct translation. In 2014 and 2015 some waste and recycling companies again asked me to write about the waste hierarchy and the interaction with the upcoming circular economy.Indeed: CE covers to a large extent the waste hierarchy. Otherwise: the waste hierarchy is a preference order. Actually, the Ladder of Lansink is a series of cycles, without landfilling unless urban mining wil be successful. Otherwise: in my book the reader will find interviews with experts from the CE field: I mention e.g. Eurocommissioner Karmenu Vella, ISWA Chairman Antonis Mavropoulos and Dominic Hoo, CEO of Eunomia (Bristol, UK)

How will new systems for will look like? Given that most recycling happens due to public pressure, do you think this will continue? Who are some new actors or stakeholders that will influence this trend positively?
In Europe, legislation has a large influence despite the historical and economical differences between West- and East Europe. The European Waste Directives (and also other directives) play an important role. Keywords for circular economic development will be prevention, design for recycling, high recycling rates, specific level of energy recovery, future ban on landfilling. Public awareness about environmental problems is lower than one or two decades ago. So public pressure seems to decrease, especially when results remain invisible. In the Netherlands: differences between the waste collection systems of local authorities cause uncertainty among the public. New actors and stakeholders are found among active enterprises, small companies and well known industrial conglomerates such as Unilever and DSM. Furthermore, initiatives from so called breed places have to be mentioned.

What do you think about the pace of systems change? Is it different from movements in the past? How is it different?
The pace will not be very fast. Looking for my proposal for the preference order in 1979, the year of legislation (1993), the European Waste Directives (2008, 2018), it’s clear that the transitions take much time. The same will be true for the transition to CE, despite of optimistic target dates (2030, 2050). The transition to circular economy differs greatly from a relative simple waste policy. New resource management requires more knowledge, new technics and cooperation between more parties with their own capabilities and interest. Moreover, the transition from local and regional to international and global field of interest (or markets) requires another scale of thinking and working. That’s also the reason why I paid much attention to the so called circular dilemmas e.g. governmental control or producer responsibility and taxes against free market; and the so called circular leakages – technical, financial and other losses of material.

What does this difference mean to new systems?
The development of new systems takes time and requires knowledge, skills and perseverance on a multitude of topics. We have to

Furthermore: producers, consumers and governments have to share their responsibilities, creating broad – also global – support.The decoupling of economy from environmental impacts is a complicated job, also because of the necessary transition towards renewable energy. Finally, the development of workable business models is a big challenge, especially for small companies

In your book, you mention that a Circular Economy is possible but if it only creates that value. Does that mean GDP value?
GDP – Gross Domestic Product – is an important indicator. GDP’s are commonly used to determine the economic performance of a whole country or region, and to make international comparisons. But in the transition to circular economy also other values have to be mentioned: social values as employment opportunities, health, safety and welfare; and of course environmental values such as biodiversity and sustainability. It’s still a problem to compare financial and other values. But qualitative indicators may help in comparing these different values.

In your book, you say that the ongoing global dialogue on circular economy and waste creates expectations that are high or not achievable. Can you give us some examples?
The first example refers to my early discussions with Michael Braungart, the cofounder of the Cradle to Cradle-concept: All waste is food. Using my philosophy. he said, human consumption may be unlimited. I asked him: what about energy, the energy content of materials and products, and what about the increasing population? Why no prevention. He answered: All energy will become renewable, and prevention is something for quilty people. A real example concerns paper fibers, which can be uses 6 – 10 times before they are useless for their original function. The same is true for other materials such as plastics, which may be used after down cycling for other functions. We don’t have enough information about the secondary resource materials from batteries. Furthermore, getting mono streams from complicated products such as print plates is a difficult job.

Also, how do natural laws fit in to understanding which expectations are high or not achievable?
Sometimes the impression that science and technology can break all boundaries, including those of nature, more and more increases. However, the transition to circular economy takes time and perseverance, and requires knowledge of the laws of thermodynamics. Closing cycles costs a lot of energy, proportional to the quantity of matter in the chain. The assumption that economy can continue to grow, independent of production and consumption volumes, is wrong. The paradigm of a never ending turnover as pointed out in the Cradle to Cradle concept, ignores the value of natural laws. Closing cycles is a necessary condition for sustainability, but not sufficient for achieving real circularity. Limiting volumes of production and consumption is difficult but also necessary. Recognizing the values of natural laws also implies that green growth remains an even wishful as paradoxical notion.

Can you talk to us a little about various implementation velocities and measures? Do you think everyone in the world is expected to do just one thing?
In Europe, the large differences between the Member States regarding their waste policy and resource management systems, resulting in recycling figures between 38% (Poland) and 78% (Belgium), require authorization of two or even more implementation velocities. The same is true for measures. Sharing knowledge and technologies may reduce the deficit for countries with relatively low figures. Aiming at the gradual transition to circular economy, a temporary derogation from the European regulation should be allowed. This allowance should be limited in time – for instance 5 or 10 years – and have substantive conditions regarding the recycling and/or incineration processes.  The world population will grow from 7 milliard people in 2011 to about 9 milliards in 2050, half of them living in Asia, with lower welfare. That’s one reason for the acceptance of different velocities. Globalization of waste and material management still demand more variation of velocities, especially in less developed countries. Otherwise: the relation with climate policy requires also attention.